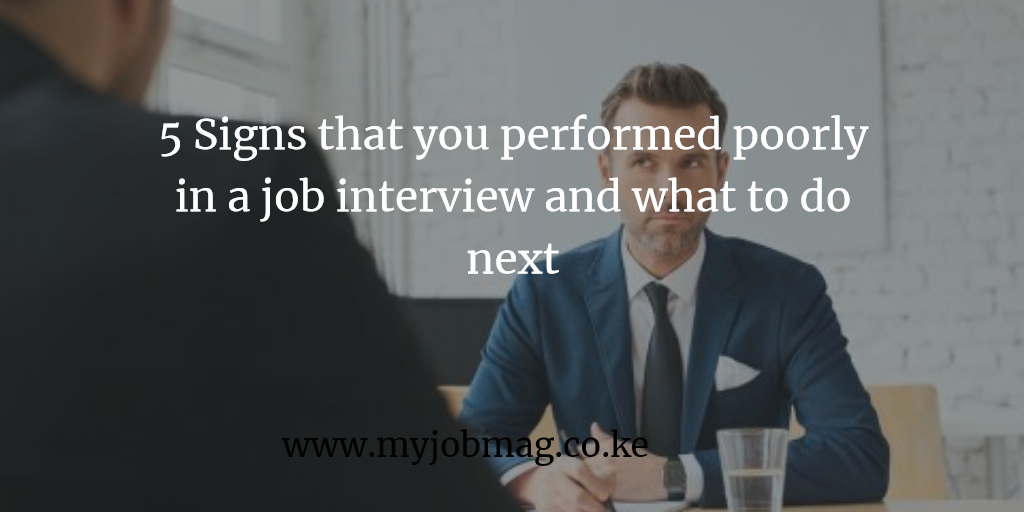 Many job-seekers think that it's difficult or even impossible to determine how well they performed during a job interview. But if you look closely, the hiring manager's body language and subtle cues will probably tell you exactly how they feel about you as a candidate. In a previous article, we had shared the five signs that you nailed an interview. In that article, we were able to conclude that, job-seekers can actually predict the outcome of their job interviews and thus know if they nailed it.

These are the five (5) signs to know if you performed poorly in an interview;

1. Your Interview was much shorter than scheduled or expected

While there may be other reasons why a scheduled interview’s time may be reduced, it is however important to state that chiefly of these reasons is if you are doing poorly in the interview. Most organizations’ activities are well-planned and a scheduled job interview does not take exemption to this. They don’t just cut down the time for no important reason. Thus, if an HR professional or your interviewer decides to take the pain of cutting an interview short, it probably means that you are not impressing him or her. This often than not shows when you fail to answer his or her first question satisfactorily. Most interviewers just decide not to go further. While this may be egocentric in the part of the interviewer, it is however important to note that as a job-applicant the concept of a first impression matters a lot.

Most individuals get their job offer based on the first response they gave. So also do most individuals fail by their first impression, thus making their interviewsshort.

If your interview is not going well, then the interviewer might switch to asking you some silly questions like general knowledge or something else. It’s fine if they asked whether you played sports, whether you knew so-and-so at your last company, whether you had hobbies, whether you enjoyed university, etc. That’s not what I mean. An example is like coming for an interview for a Programming Position and they start asking you about the traffic on your way there or even start counselling you about getting more certification or training. This is just a waste of time and he is only passing time with you without actually thinking of hiring you.

If there are no questions asked regarding your skills, potentials or no details are provided to you regarding the job profile then all these symbolize a bad interview session. Asking silly questions during interview period is simply wasting your time.

3. Your Interviewer Refers to Other Candidates as Better Fit for the Job Position

Usually, your job interview is focused on you alone, except if it’s a group interview where the interviewers are trying to assess your competency as regarding team-work. However, if you are alone in the interview, it’s only natural for you to be the focus, not the candidate who came in before you or the one coming after you. If the interviewer thinks that you are appropriate for the job, then he will discuss onlyyou and not about the other candidates who have applied for the same post. An example is if your interviewer asks you a very subjective question and expects you to answer it in the manner he likes. If you did not and the previous candidate had, most interviewers may not necessarily comment on it. However, if he or she does comment on it and start comparing you with the previous candidate or even telling you bluntly that the other candidate answered it correctly, tendencies are that you already flopped. The interviewer is just indirectly telling you he or she prefers the other candidate.

4. The Interviewer does not talk about your Future Prospects with the Company

An interviewer that is really interested in you will always like to know how you can benefit the company and also, how the company can benefit you too. He will not only discuss present situation but also what the company would want from you in the coming years. The interviewer may also inform you about benefits that you can avail if you progressively work for the entity. Usually, if it is going well, they may be the one even trying to sell you the company or the job position. They want to attract you, just like you are trying to sell yourself to them.

However, if your interviewer does not talk about any of such things but rather keep on interrogating your skills and efficiencies, then there are tendencies that he or she is not really ‘feeling’ you.

In the article five signs that you nailed an interview, it was mentioned that some individuals make it a thing of duty to ask their interviewers for a contact – email or phone number. This is so that they can probably send a ‘thank you’ mail or get subsequent feedback from them informally. However, if an interviewer already knows that you performed poorly and you will not get the job, giving you his or her contact is just creating for him or herself an unnecessary ‘disturbance’ – as you will keep disturbing since you didn’t get the job. If you took the step to ask for a contact, and the interviewer refuses, tendencies are that you performed poorly. The manner in which he or she refuse also matter. While some may refuse in a kind or courteous manner, some may not. If your interviewer did refuses blatantly, you probably performed poorly.

Conclusion (What to Do Next)

This is the truth, no matter how bad or good you think your interview may have gone, the most appropriate thing for you to do, is to keep job-searching. Keep applying for jobs. There is no gain sitting at home nervous for days and doing nothing. You should keep the momentum going. A big mistake most job seekers make is that after they get one or two interviews, they stop applying for new jobs, and they just hope the sets of interviews they had will turn into a job offer. Objectively, the rule is never to stop applying until you receive that job mail stating that you have been hired. Otherwise, keep working, keep pushing, and keep applying. Good luck!

Want to get a job fast? Signup and complete your profile on MyJobMag. Employers will find you 4x faster with a complete profile. You can download your completed profile anytime
Signup Now

This article was written and has been reviewed by our HR team.
Share